Home » Top 10 Amazing Facts About Paris – The City of Love

Top 10 Amazing Facts About Paris – The City of Love 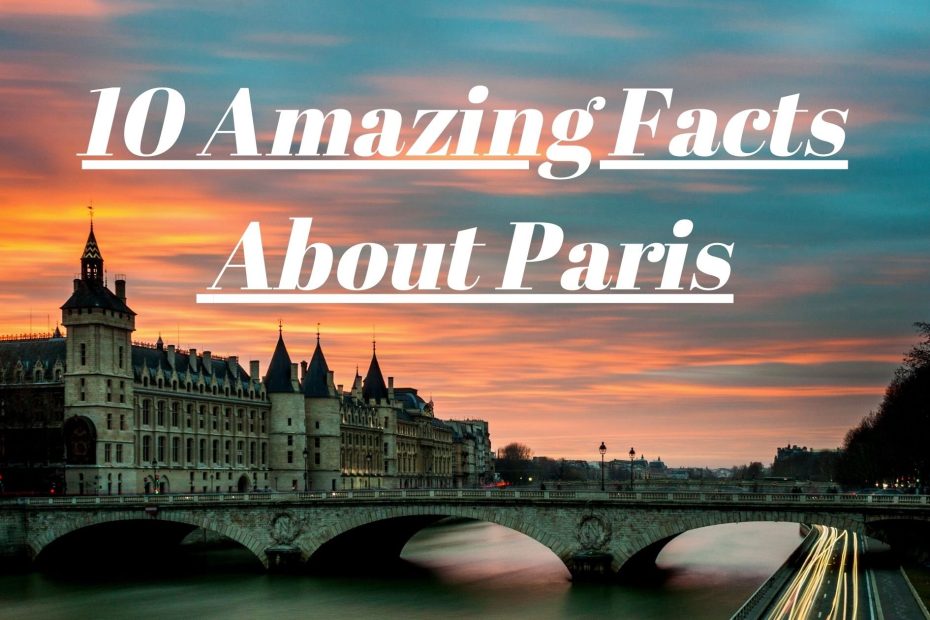 Hey Guys Welcome to FactsMinister. Today we will show you top 10 amazing facts about Paris.

Paris, France, the city of love and romance, is an incredibly popular destination for tourists all over the world. The reason is its incredible history and its beautiful architecture, like the Eiffel Tower, which was built in 1889 to celebrate the French revolution and was the tallest building in the world until 1930! But Paris has so much more to offer than just the Eiffel Tower and its rich history; here are 10 amazing facts about Paris that you may not have known before :

One of the Unknown Facts About Paris is actually related to the most famous part of the city.

If Paris is most famous for anything, it is the Eiffel Tower. The weight of the Eiffel Tower is about 7000 tons and the weight of the paint on it every year is 50 tons. Its upper end is at an altitude of about 324 meters. This historic tower was built to celebrate the celebration of 100 years of the French Revolution. It was constructed in 1887-89 and remained the tallest building in the world until 1930. One of the amazing facts about the Paris Eiffel tower is that initially there was a protest for not constructing the tower. At that time people considered it a “stain” on the beauty of Paris but the rest is history.

Another Amazing Facts about Paris is that the famous Mona Lisa painting is kept in one of its museums.

There are more than 200 museums in Paris. Opened in 1793, the Musée du Louvre is one of the most special museums in the world. More than 35 thousand samples of art have been kept here. Leonardo da Vinci’s world famous painting Mona Lisa is also present. On the  opposite side of the Mona Lisa painting there is the beautiful painting of a wedding ceremony in Cana. This painting is over 10 meters tall and is a real work of awe-inspiring art. One of the amazing facts about Paris’s Louvre museum is that every year around 1 crore people from all around the world will come to see it. Apart from this, entry fees are not charged in many museums, galleries and other places of visit.

Paris is a city that has more dogs than children living in the city. Parisians love dogs. One of the amazing facts about Paris is that According to an estimate, the people living in Paris have housed about 5 lakh dogs. That is more than the population of children. People are also allowed to take their dogs to the restaurant.

Some of the amazing facts about Paris are about its famous names. It is called “City of Lights” and “ City of Love”. City of Lights has basically two theories because It alludes to the city’s long history of attracting a large number of writers, artists, and scholars and also it is the first European city to adopt the concept of Street Light. Paris is also called The City of Love because To the north of Paris is the Wall of Love on the 130-metre-high Montmartre hill. On this wall of 40 square meters, artists have written ‘I love you’ in 300 languages on 612 tiles.

Another one of the amazing facts about Paris is that winner of the yearly Baker contest act gets a chance to cook for the President.

The people of France are very fond of food. If you want to enjoy French cuisine, then Paris cannot be forgotten. All types of restaurants, big or small, take great care of the guests and fill them with pride. Most of the restaurants and bars built here are in the open places, Espresso and strong black coffee are famous in France. You can enjoy this coffee at many places in Paris. One of the amazing facts about Paris is that Every year a contest is held here to choose the best baker. And the one who wins the contest gets a chance to cook for the President.

6. Fashion Capital of the World

Paris is also called  fashion capital of the world , and the majority of the world’s most well-known fashion labels are French . One of the amazing facts about Paris is camouflage Military uniforms. The French were the first to deploy camouflage clothes in the military; the word “camouflage” basically translates to “make up for the stage.”

One of another amazing facts about Paris is that the Famous Pres cafe de Flore has been the place for debates since 1930s.

One of the amazing facts about Paris is the debating culture. Paris’s Café de Flore is  famous among artists and political thinkers for  debating and initiating talks related to innovations happening in the world. In the 1930s, bohemians with unusual lifestyles associated with the art class used to gather here late at night to discuss various issues. From 1930’s to present date there is a great level of intellectual debates and arguments which are presented here.

8. The Love for their Language

If you ask someone in Paris something in English, don’t be surprised if you get an answer in French.  The amazing facts about Paris is love for their language. But it doesn’t mean people in Paris are rude enough not to help you. And with the help of the guide you can still make a great travel life here in Paris.

The banks of the Seine River have been included in the UNESCO World Heritage List since 1991. The city’s 37 bridges connect the southern and northern sides. The amazing fact about Paris is the Seine cruise is a terrific way to see Paris at night and lasts around an hour. After sunset, the city landmarks are illuminated, giving a unique effect. Autumn is considered the best season to visit Paris, as the city is more calm and beautiful during this time. The autumn season is considered from 23 September to 22 December.

In order to control the increasing pollution caused by vehicles from time to time, the city government had implemented the same rules here, which the Kejriwal government did in Delhi. That is, cars with odd numbers will run on odd number dates and cars with even numbers will run on even number dates. One of the amazing facts about Paris is the cycling culture. The number of cycles and cyclists in Paris are increasing gradually. This can prove to be very good for the environment here.