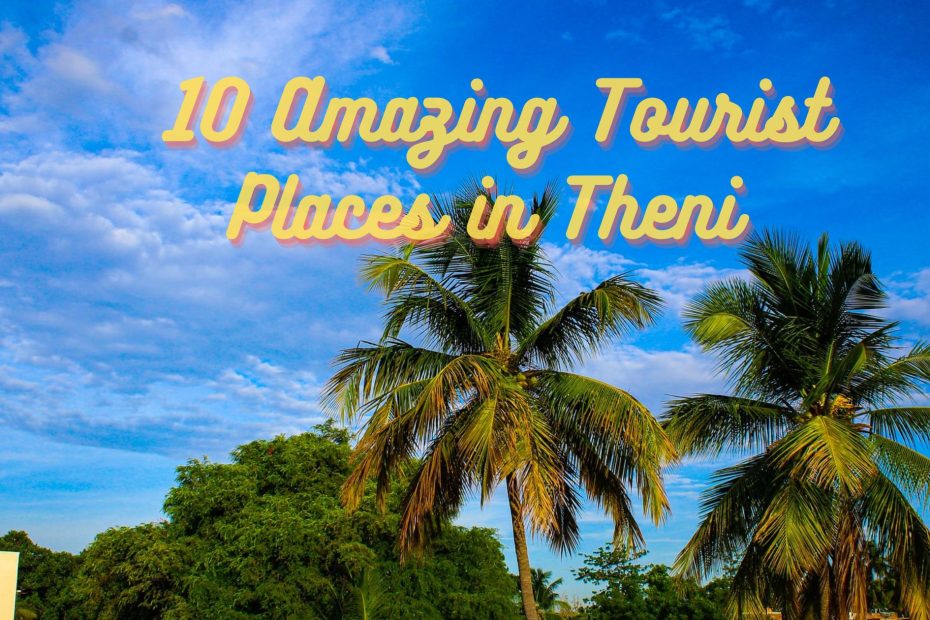 Hey Guys, Welcome to FactsMinister. Today we will be sharing with you the Top 10 best Theni Tourist Places.

Theni is one of Tamil Nadu’s most beautiful places to visit. The district located in the Western Ghats is a wonderful destination to visit for a vacation. Periyakulam, Uthamapalyam, and Andipatti are some of the spots in this district that are best for expeditions. Many of these locations are well-known for their arts and crafts industries. Many spectacular waterfalls are found here, including the Suruli Falls and Kumbakarai Waterfalls. There are numerous temples in Theni, which is a popular Hindu pilgrimage location. So in this article we will show you Top 10 best Theni Tourist Places.

One of the Best Then Tourist Places where the devotees come to cure the illness they are suffering.

Veerapandia Kattabomman, the ruler of Pandya constructed the Gowmariamman temple in the 14th century. According to legend, King Veerapandya saw Goddess Gowmariamman and Kanneshwara Mudiyar in a dream and ordered the construction of this temple. Gaumari is the deity of this temple. There is a belief that this goddess grants all of the worshippers’ wishes. The temple’s biggest festival is celebrated here throughout the months of April and May. This temple’s location is 8 kilometres from Theni. Veerapandi Gowmariamman Devi Temple is on the banks of the Mullai river.

Many people in and around Tamil Nadu claim this place to be one of the best Theni Tourist Places because Veerapandi Gowmariamman Devi aids the devotees in recovering from any illnesses they may be suffering from. Devotees are of the opinion that  have healed after receiving her blessings and mercy. So it is one of the popular places in Theni.

Meghamalai Hill is about 70 kilometres from Theni. Its location is at a 500-foot elevation above sea level. This location is beautiful due to a diverse range of animals and flora and this makes it one of the best Theni Tourist Places. There are almost 100 different bird species located here. For bird watchers, this is a must-see location. Winters are the best time to visit this place.

The Tamil Nadu government has developed a bird sanctuary due to the diversity of species found here. The Meghamalai hill is home to a wide range of mammals, reptiles, and butterflies. Leopard Tiger, Wild Wore, Nilgiri Tahr, Porcupine, Flying Squirrel, Spotted Deer, and more animals found here. The tea garden here is also a well-known place to visit. A cardamom orchard is also located here. However, the majority of this area is surrounded by deep forests.

One of the most famous Theni Tourist Places famous for its sacred water tank.

Tirtha Thotti is a 19-kilometre drive from Theni. It is 2 kilometres away from the famous Theni town Periyakulam. Lord Subramaniam Temple is  in this well-known pilgrimage location. This temple is over a thousand years old. Theertha Thotti is a sacred water tank. A grove of Neem trees surrounds this natural water tank so Teerth Kotti is the name given to this tank because of this reason . This tank is a natural spring that never runs out of water. In the ground of this tank, there is also a pavilion for which the stairs are there. On the wall, there are a lot of carvings of many structures. Here, Lord Murugan and Vinayaka worshipped in this place. Overall due to the famous pilgrim places, it is one of the best Theni Tourist Places.

To know more about Theertha Thotti refer to the link below :

One of the Best Theni Tourist Places to visit with families.

In Theni District near Andipatti village, the Vaigai Dam is  on the Mullai River. This dam ‘s location is 25 kilometres from Theni. Picnics enjoyed here by tourists and their families in the dam’s vicinity. A children’s park, a zoo, and a garden are all located near the beautiful Vaigai dam.

Vaigai Dam being the best place for sightseeing and entertainment, it is  one of the most amazing Theni Tourist Places. On January 21, 1959, the dam was officially opened. This dam has a length of 111 feet and a width of 71 feet. This dam provides drinking water to the entire city of Madurai. Near this dam, the Tamil Nadu government built an Agricultural Research Centre, which conducts research on a variety of pulses and grains.

One of the Best Theni Tourist Places famous for its spiritual history.

The Kuchanur Sri Saneeswara Bhagavan Temple located in Kuchanur is a well-known pilgrim place in India. Lord Shani is said to be residing in this place. As a result, the city named after Lord Shani’s name, Kuchanur. This temple is exceedingly old, and experts think Lord Shani resides within its walls. This temple is also dedicated to Lord Hanuman, and the Panchmukhi Ganesh idol worshipped in this place . The temple is on a river’s edge. Kuchanur is about 20 kilometres from Theni. Thousands of devotees arrive from all around the country to this beautiful place and consider it one of the best spiritual Theni Tourist Places. Every year, during the major festive season, devotees flock to this location to take blessings for their well-being.

The Kailasanathar Temple Cave  located near the famous Suruli Waterfalls is one of the best places to visit in Theni. At an elevation of 800 metres above sea level, this temple cave is found. Festivals were held in this temple cave during ancient times, according to the Tamil epic Silappadikaram. There is also a natural spring at the temple that is said to have healing effects. Many people also come here because of the natural spring situated in the temple. People come here to wash off their sins and heal the diseases. Due to the spiritual calmness around this place,Kailasanathar Temple Cave is considered as one of the best Theni Tourist Places.

On Saturdays, worshipers in this shrine offer milk with reverence. The temple constructed circa 700 CE, with extensions and restorations in the 8th and later centuries. Narasimhavarman II (Rajasimha), also known as Rajasimha Pallaveswaram, constructed the earliest structural temple in South India. There is also a secret tunnel built by previous kings in this temple.

Chinna Suruli Falls, located in the midst of lush, green forests is a beautiful Theni Tourist Place. It flows all the way down from Meghamalai Hills to produce a cold, glittering pool at the mountain’s foothills. Chinna Suruli Falls is located about 54 kilometres from Theni’s main centre in the Kombaithozhu town. It is a nice and quiet place to visit in and around Theni. If you are visiting Tamil Nadu or places near Theni, it should be included in your local tourist plan. The silver sparkling clouds that cover the entire waterfall make for a stunning sight. This waterfall gives breathtaking views of Theni, making it a must-see for photographers. Many wedding and Film photo shoots took place in this place.

To know more about Chinna Suruli Falls refer to the link below :

It is one of the Best Theni Tourist Places for Hiking lovers.

The Kurangani Hills are a fantastic destination for hikers and environment lovers alike. The magnificent view of tea plantation hills, as well as the deep woods and soothing grasses, make the area ideal for a memorable journey. The Kurangani Hills walk is a 12 km hike through Central village from Kurangani village to Top Station. Kurangani Hill is close to the Kolukkumalai Hills, which are a well-known tea-growing region in the globe, located at an elevation of almost 8,000 feet.The natural beauty of the area has also captivated several filmmakers. The hills offer a diverse diversity of flora and fauna, as well as frequently changing weather. Low-hanging clouds, a cool atmosphere, and powerful winds make it one of the best Theni Tourist Places.

The Balasubramanya Temple in Periyakulam, Theni district, is a significant temple in Tamil Nadu. Lord Murugan, the temple’s principal deity, has six heads and accompanied by his consort. The Balasubramanya Temple is Tamil Nadu’s most visited temple and one of the best  Theni Tourist Places for spiritual experiences . The Temple is thought to be around 200 years old. The temple is located on the banks of the Varaha River. This Temple is also considered as Kasi by people here because the Brahma Theerta which flows here has cured many diseases of People.

According to tradition, King Rajendra Chola accidentally strangled a pig as it was nursing its offspring. Lord Murugan was later seen feeding the starving piglets by the powerful Chola emperor. The King was moved by this divine event and ordered the construction of this temple.

To know more about The Balasubramanya Temple refer to the link below :

One of the Best Theni Tourist Places famous for its natural beauty and picturesque environment.

The Kumbakkarai Falls, located in the foothills of the Kodaikanal Hills is one of the amazing Falls in the Theni District. This waterfall gets its water from the Kodaikanal Hills and cascades down the rocks in two stages. People travel from all over the country to see the natural, picturesque splendour of this location in the foothills, and it has become one of the most popular Theni Tourist Places. The weather remains cold and pleasant throughout the year, making it possible to see the waterfall at any time. The optimum time to visit the waterfall, however, is during the summer and late winter months.