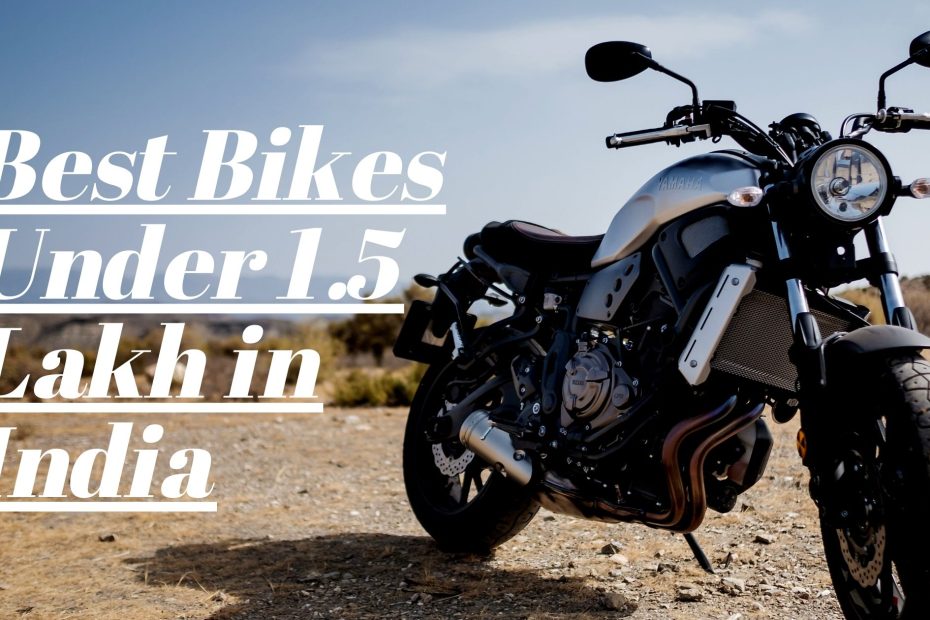 Bikes have always been the most popular means of transportation in India. And this trend isn’t set to change any time soon either. With brands like Bajaj launching their products every year, and companies like Royal Enfield trying to regain lost grounds, new bikes are coming out, each promising to be the best there ever was in its price range. This makes it hard to choose which one you should buy, especially if you’re on a budget. So, Today at FactsMinister, we are going to share the list of top 10 best bikes under 1.5 lakh that you can check out right now!

One of the Best Bikes Under 1.5. Lakh if you are looking for an electric option.

The Tork Kratos is India’s newest electric motorcycle and is offered in two variants, the standard Kratos and the top-spec Kratos R, each with different performance and charging times. It looks sharp, has muscular and pointed bodywork, and has a sporty stance. It is definitely one of the best bikes under 1.5 lakh. The main difference between the standard Kratos and the Kratos R is the electric motor’s output, top speed, and more color options on the Kratos R, along with a few features.

A 7.5kW electric engine produces 5.36 horsepower and 28 Nm of peak torque on the new Tork Kratos electric motorcycle. The Kratos R is a more performance-oriented variant, with a 9kW motor producing six horsepower and 38 Nm of peak torque. A 4kWh Li-ion battery pack is used on both of these electric motorcycles. They both have a top speed of 100 kmph and 105 kmph, respectively. And can accelerate from 0 to 40 kmph in 4 seconds and 3.5 seconds.

The motorcycle is powered by a 249.07cc single-cylinder, oil-cooled engine with fuel injection that produces 24.1bhp at 8,750rpm and 21.5Nm at 6,500rpm. The motor is connected to a five-speed gearbox with a slipper clutch and it assists function.

The next-generation Bullet 350, which is slated to appear in our market later this year, is presently being tested by Royal Enfield. Several photos of the pre-production test mules have surfaced, revealing a little information about the future motorcycle. It is one of the best bikes under 1.5 lakhs that are going to be released in 2022.

The feature list will be essential, similar to the previous version. As a result, the Bullet 350’s next-generation will keep its halogen headlight and traditional bulb blinkers. The instrument cluster could feature a semi-digital display, while higher-end models could get Tripper Navigation. Royal Enfield 350 will undoubtedly retain the single-channel ABS in the safety net.

Check out all the Royal Enfield Bikes getting released this year. And the current Bullet 350.

In April, Yamaha is expected to introduce the 2022 iteration of their MT-15 motorcycle in India. The two-wheeler will receive several upgrades, including inverted front forks, a Bluetooth-enabled instrument dashboard, and dual-channel ABS. It is powered by a 155cc liquid-cooled 4-stroke engine with a 6-speed transmission under the hood. It is one of upcoming best bikes under 1.5 lakh rupees.

The new Yamaha MT-15 will include disc brakes on both the front and back wheels and dual-channel ABS to prevent the rider from skidding on the road while braking. Also, The bike will be equipped with an all-LED lighting system, a Bluetooth-enabled digital instrument dashboard, and alloy wheels.

The Apache RTR 160 is the Apache series’ first motorcycle. It is one of the best bikes under 1.5 lakhs from the TVS brand. The motorcycle is built with a racing mindset and has a muscular and edgy appearance. The Apache 160 has beast-inspired headlamps upfront, giving it a menacing appearance.

In addition, the TVS Apache RTR 160 has a muscular tank with expanded shrouds, a sculpted engine cowl, and a sleek tail design. Racing graphics decals are applied to the motorcycle to highlight its racing heritage, and the LED tail lamp gives the back end an elegant and sharp appearance.

A redesigned tubular frame supports the motor, which is suspended from a telescopic fork and a monoshock. Braking is handled by a 300mm front disc and a 230mm rear disc, both of which are assisted by single-channel ABS.It is one of the best bikes under 1.5 lakhs if you want to go with the reliable brand of Bajaj.

The Honda CB200X is a motorcycle that starts at Rs. 1,66,898 in India. It comes in only one color and one version. The Honda CB200X is driven by a 184.4cc BS6 engine that produces 17 horsepower and 16.1 Nm of torque. The Honda CB200X features anti-lock brakes on both the front and rear disc brakes. It is one of the best bikes under 1.5 lakh rupees. The gasoline tank capacity on this CB200X bike is 12 gallons, and it weighs 147 kg.

The Honda CB200X is now marketed as a bike that riders can use for light off-roading. However, the suspension hardware is identical to that of the Hornet 2.0 [ mentioned below]with inverted handlebars and a monoshock. The braking system is similar, with 276mm discs up front and 220mm discs in the back and single-channel ABS.

Honda calls the Hornet 2.0 a stark streetfighter, and it certainly looks the part. The overall length, width, and height of the Hornet 2.0 are 2,047mm, 783mm, and 1,064mm, respectively. It has a structural strength of 167mm and weighs 142 kg, and it also features a gasoline tank with a capacity of 12 liters.

The Honda Hornet 2.0 latest design comes with full-LED illumination for the headlamp, tail lamp, and side blinkers, among other improvements. It is one of the best bikes under 1.5 lakhs .It also comes with a reverse LCD sensor that displays various rider-centric data. The bike is fitted with single-channel ABS as the benchmark on the safety front.

In India, the Hero Xpulse 200 4V is an adventure bike with a starting price of Rs. 1,30,000. It is considered as one of the best bikes under 1.5 lakh. The Hero Xpulse 200 4V is driven by a 199.6cc BS6 engine that produces 18.8 horsepower and 17.35 Nm of torque. The Hero Xpulse 200 4V comes with anti-lock brakes on both the front and rear disc brakes. The gasoline tank capacity of this Xpulse 200 4V bike is 13 gallons, and it weighs 158 kg. Hero MotoCorp states that the LED headlamp provides superior illumination and that the seven-fin oil-cooled cooling system provides better cooling. An LED headlight bulb, a Bluetooth-enabled meter cluster, and a mono ABS are included. Other differences between the two-valve and four-valve versions include updated switchgear with an integral starter/engine cut-off button.

Although the manufacturer has fresh color schemes and improved graphics for the XPulse 200 4V, the aesthetic characteristics remain unchanged. MattBlue,  Blue, and Red are three additional color options for the motorcycle. A circular headlight, a wind deflector, a sleek taillight, a high front fender, wire-spoke wheels, and a tall-set exhaust remain on the bike.

The Yamaha FZ X is available in two versions: a basic version for Rs. 1.17 lakhs and a Bluetooth version for Rs. 1.25 lakhs. It is slated as one of the best bikes under 1.5 lakh.  Black, Copper, and Blue are the three colors available for the bike. It gets a new LCD screen and a complete LED treatment on the front and back. The motorcycle gets a whole front end with a gorgeous headlight arrangement equipped with inbuilt DRLs, giving it a style that resembles a cross between a Yamaha XSR700 and a Ducati Scrambler. Attractive colors are used on the motorcycle’s fuel tank, which has a massive muscular appearance.

Out of the two, the Yamaha FZ X Bluetooth model is equipped with Yamaha’s Y-connect Bluetooth app, which may display features such as fuel efficiency, maintenance advice, and more. A 12V power port is located just beneath the display for recharge purposes. Yamaha appears to have opted for a more comfortable ride with the FZ X. That’s the one thing it excels at, thanks to its pleasant and neutral design and high performance.