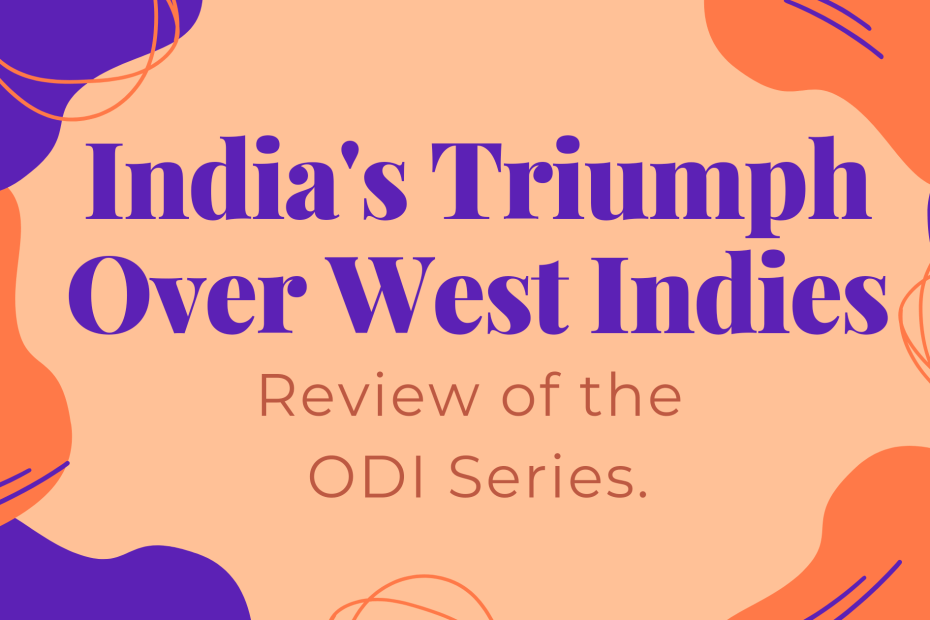 India vs West Indies 3 Odi series held in Narendra Modi Stadium, Ahmedabad concluded yesterday with India winning all the three matches. This win comes in the light after a debacle performance in South Africa. The clean sweep against West Indies gives a new confidence to Rohit Sharma with his captaincy. Overall all the players in the squad gave their best in winning the series. Now the team is looking forward to win the T20 series which is on 16th February 2022.

India defeated West Indies by six wickets in the opening ODI to take a 1-0 lead in the three-match series. New white-ball skipper Rohit Sharma got a fifty. Sharma, who had returned to action following  an injury, hit a 51-ball 60 as India chased down a total of 176 in 28 overs for a comfortable win in their 1000th ODI. The other contributors were Ishan Kishan (28), Suryakumar Yadav (34 not out), and Deepak Hooda (26 not out).

Former captain Jason Holder’s 57 off 71 was the sole saving grace for the Windies, who were bowled out for 176 by a spin combo of Washington Sundar (3/30) and Yuzvendra Chahal (4/49) who shared seven wickets between them.

India thrashed West Indies by 44 runs in the second One-Day International in Ahmedabad on Wednesday, giving the hosts an unassailable 2-0 lead in the three-match series. Prasidh Krishna produced a powerful bowling performance to help India win by 44 runs. India bowled out West Indies for 193 runs thanks to a dominant bowling effort from Prasidh Krishna (9 overs, 3 maidens, 12 runs, 4 wickets).

India had previously scored 237/9 when they did ther batting. Suryakumar Yadav top-scored  64 runs, while vice-captain KL Rahul was run out one run short of his half-century. Deepak Hooda, who made his ODI debut in the previous encounter, scored 29 runs, while Washington Sundar, an all-rounder, chipped in with 24. Alzarri Joseph (2/29) and Odean Smith (2/36) each got two wickets for the West Indies.

India defeats West Indies by 96 runs in the third One-Day International (ODI) completing a 3-0 series sweep. Indians bowled out the Windies for 169 in 37.1 overs, after Setting a 266 runs target. Prasidh Krishna and Mohammed Siraj were in outstanding form for India’s bowling attack, both taking three wickets. Deepak Chahar and Kuldeep Yadav, on the other hand, both managed to take a couple scalps.