Home » IPL Auction 2022 Preview | Top Players, Retentions, and Everything Else.

IPL Auction 2022 Preview | Top Players, Retentions, and Everything Else. 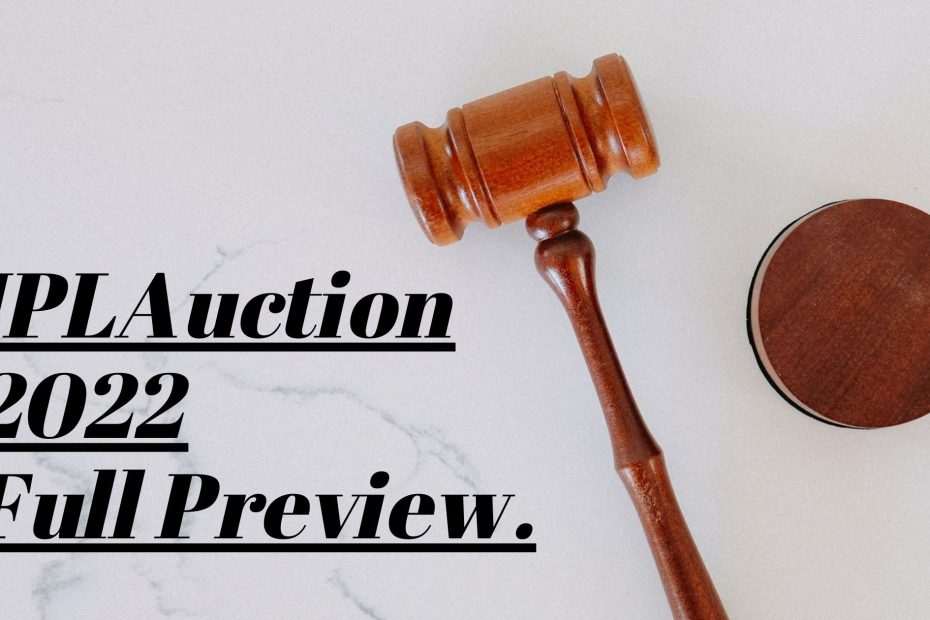 The Indian Premier Tournament is a men’s Twenty20 cricket league in which eight teams from eight Indian cities compete. The BCCI Cricket Association thought of this idea of the IPL in 2007 under the direction of Lalit Modi. It is usually conducted between March and May each year and provides an opportunity for young athletes to shine and earn a spot to represent their country. The IPL is the most fascinating league not only in India but also in the world.

In addition, the IPL became the first game on the planet to be aired live on YouTube. It then began to broadcast on Hotstar. The IPL’s overall brand value has risen year after year as the calibre of players and competitive teams has improved. The IPL has been running for fourteen seasons, with Mumbai Indians winning five times and Chennai Super Kings winning four times. Due to the Covid Pandemic in 2021, BCCI postponed the IPL in the middle, and later games were played in Dubai. After defeating Kolkata Knight Riders, Chennai Super Kings won the trophy for the year 2021.

One of the key causes for the frenzy is the IPL 2022 super auction. Ahead of the IPL 2022 mega auction, teams were only allowed to keep four players. This permits teams to compete for the remaining in the auction. The mega auction is a huge help to teams looking to rebuild their rosters. The mega auction has grown even more intriguing since two new teams were added to the IPL’s list in 2022. Gujarat Titans and Lucknow SuperGiants will be the two new teams. KL Rahul will captain the Lucknow Supergiants and Hardik Pandya will be captain of Gujarat titans.

The IPL Mega Auction will be a two day event which will be in Bengaluru on feb 13 th and 14th. The previous eight franchises  had to return the majority of their players to the auction pool, with only four players remaining/ retained. The two new franchises, on the other hand, have the opportunity to select three players from the auction pool ahead of time.

A maximum purse balance of Rs. 90 crore provided to each of the ten franchisees. None of the franchises, on the other hand, will be going into the auction with a full bankroll. The cost of retaining players  will be deducted from each team’s budget.Punjab Kings has a maximum amount of 72 crores after retention. On the other hand, Delhi Capitals will go to auction with the lowest amount of 47.5 crores after retention.

Virat Kohli, an Indian batsman,  signed a contract with Royal Challengers Bangalore for the 2022 season. Kohli  retained for a sum of 15 crores, while Mohammed Siraj signed for 7 crores and Australia’s Glenn Maxwell signed for 11 crores. Prior to the Ipl auction in 2022, they have a balance of 57 crores.

Mumbai Indians  retained the services of Indian batsman Rohit Sharma for the 2022 season. Rohit  retained for a fee of  6 crore while his team also signed Jasprit Bumrah  for 12 crores. Surya kumar Yadav  for 8 crores. West Indies captain Pollard for 6 crores. Their remaining balance is 48 crores ahead of Ipl auction 2022

Mahendra Singh Dhoni, former Indian captain and  batsman, signed a contract with Chennai Super Kings for the 2022 season. Dhoni retained for a sum of 12 crores, while Ravindra Jadeja signed for 16 crores and England’s Moeen Ali signed for 8 crores. Ruturaj Gaikwad retained for 6 crores Prior to the Ipl auction  2022, they have a balance of 48 crores.

Kane Williamson, Newzealand  captain and  batsman, signed a contract with SunRisers Hyderabad  for the 2022 season. Williamson retained for a sum of 14 crores, while Abdul Samad signed for 4 crores and Umran Mallik  signed for 4 crores. Prior to the IPL auction 2022, they have a balance of 68 crores.

Rishabh Pant, an Indian batsman and Wicket Keeper, signed a contract with Delhi Capitals for the 2022 season. Pant  retained for a sum of 16 crores, while Axar Patel signed for 9 crores and Prithvi shaw signed for 7.50 crores. South African bowler Anrich Nortje signed for 6.5 crores. Prior to the Ipl auction 2022, they have a balance of 47.5 crores.

Mayank Agarwal , an Indian batsman, signed a contract with Punjab kings for the 2022 season. Agarwal retained for a sum of 12 crores, while Arshdeep Singh signed for 4 crores . Prior to the Ipl auction 2022, they have a balance of 72 crores.

Sanju Samson , an Indian batsman,  signed a contract with Rajasthan Royals  for the 2022 season. Samson retained for a sum of 14 crores, while Jos Butler  signed for 10 crores and Yashasvi Jaiswal signed for 4 crores. Prior to the Ipl auction in 2022, they have a balance of 62 crores.

KL Rahul, an Indian batsman, signed a contract with Lucknow Super Giants  for the 2022 season. Rahul  retained for a sum of 17 crores, while Marcus Stoinis signed for 9.2 crores and  Ravi Bishnoi signed for 4 crores. Prior to the IPL auction in 2022, they have a balance of  58 crores.

Hardik Pandya, an Indian batsman and all rounder,  signed a contract with Gujarat Titans for the 2022 season. Pandya retained for a sum of 15 crores, while Rashid Khan  signed for 15 crores and  Shubman Gill signed for 8 crores. Prior to the Ipl auction in 2022, they have a balance of  52 crores.

Base Price of Players in IPL Mega Auction 2022

For the ten IPL teams, a total of 370 Indian players and 220 international players would be available.INR 2 crore is the most expensive base price, followed by INR 1.5 crore and INR 1 crore. INR 50 lakh and INR 20 lakh are the remaining pricing ranges. In the Rs. 2 crore bracket, there are 17 Indian participants and 33 international players. In terms of the auction, the first players available to  pick will be from the ‘Marquee List,’ which consists of ten cricketers. The 590 participants sorted into groups based on their base prices.

RCB , Punjab Kings and SRH — What they will be looking for in IPL Auction 2022

Royal Challengers Bengaluru are desperately looking for a captain as the former captain Virat Kohli quit the post of captaincy last year. There are many rumours on the question  of Captaincy. Recently Akash Chopra in his youtube channel said that RCB can choose Shreyas Iyer as the captain after purchasing him for 20 crores. But it is not clear as of now regarding the players to be chosen by RCB in IPL auction 2022.

SunRisers Hyderabad, the champions of 2016 IPL are looking forward to choose some great openers. Last year after a debacle performance they are looking to rectify their mistakes.The main problem with sunrisers is their lack of  proper batsman and middle order.So in this mega Auction they will be very enthusiast to choose some power hitters and consistent middle order batsman.

Punjab Kings are going to auction with the highest amount of money. As Mayank Agarwal is leading their team, they need an extra opener which they will be looking for. Since last few years Punjab trajectory is down so they look forward to put extra effort in IPL auction 2022 and gain some top class players.

Where can we watch the IPL Mega Auction?

The Board of Control for Cricket in India (BCCI) has also established specific instructions for the auction. The entire event will take place in a biosecure bubble, and all officials taking part in it will have to pass an RT-PCR test.

The IPL 2022 auction will begin on February 12 at 12:00 p.m. At 11:00 a.m., live coverage of the event will begin. The Star Sports Network will broadcast it live.You can also watch the auction on Disney+ Hotstar.