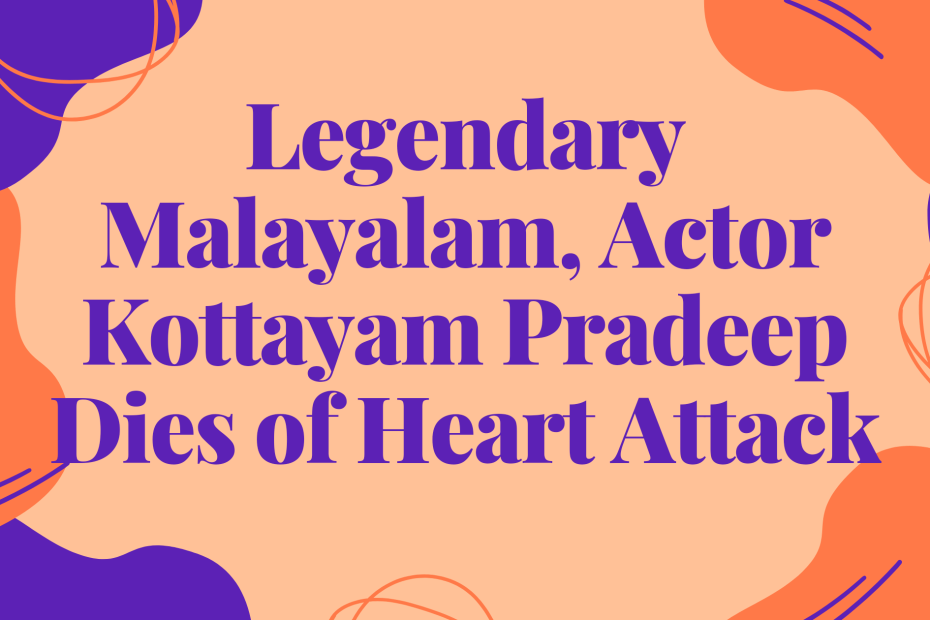 Malayalam actor Pradeep KR, also known as Kottayam Pradeep, died on Thursday after having a heart attack. The actor was 61 years old at the time. The untimely death of Kottayam Pradeep has sent shockwaves through the Malayalam film industry. Maya, his wife, and their two children survive him. Prithviraj Sukumaran paid his respects on social media.

At the age of 40, Kottayam Pradeep made his film debut in 2001. He appeared in almost 70 films and was best recognised for his humorous roles in those films. Pradeep made his acting debut in Sasi’s film Ee Nadu Innale Vare. He began his career in Malayalam as a junior artiste, portraying non-speaking roles/parts.

Pradeep Kottayam was born in 1961 in Kottayam, Kerala, India, to Rakhavan and Padma. Maya Kottayam and Pradeep Kottayam married and had two children, Vishnu Siva Pradeep and Vrinda Pradeep.

Pradeep Kottayam began his career as a junior artist, appearing in roles that were non-speaking and uncredited. Ee Nadu Innale Vare, directed by I. V. Sasi, was his debut film, released in 2001. Gautham Vasudev Menon’s film Vinnaithaandi Varuvaayaa gave him his big breakthrough. He has since appeared in a number of films, including Aadu Oru Bheegara Jeevi Aanu, Oru Vadakkan Selfie, Life of Josutty, Kunjiramayanam, Welcome to Central Jail, Amar Akbar Antony, Adi Kapyare Kootamani, and Kattappanayile Rithwik Roshan.He was also known for his best comedy movies in Malayalam.

Tributes Pour in for the Actor

Director John Mahendran was shocked to hear the news about Pradeep Kottayam’s demise. Sharing his photo, he wrote, “A very natural actor #Pradeepkottayam from Malayalam movie industry passes away

Similarly many fans and actors of the Malayalam film industry expressed their Condolences to the actor.

With the demise of Pradeep Kottayam it is a big loss for the entire Malayalam and entire Indian film industry.