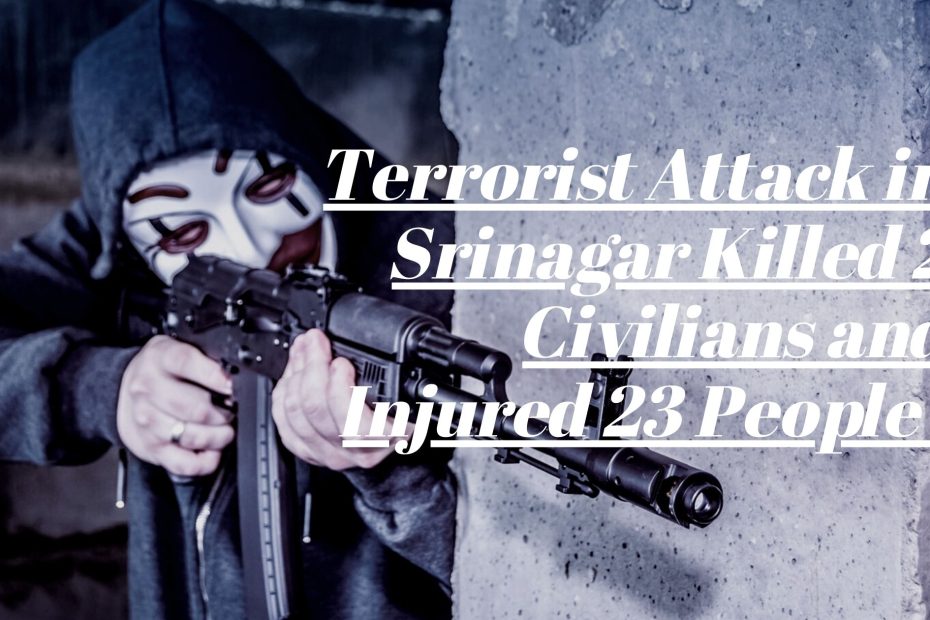 A grenade strike in the heart of Jammu and Kashmir’s Srinagar city killed two civilians and injured at least 23 others, including a police official, according to police. This attack took place on Sunday Located in the bustling Amira Kadal neighbourhood, which also hosts a renowned Sunday street market.

This cowardly attack took place around 4:20 pm in the evening. The police officials said that the are investigating the matter and as of now no terrorist outfit has taken the responsibility of this attack. Also one of the police official is injured but many civilians are affected by the attack.

The deceased were identified as Mohammad Aslam Makdoomi, of Naidkadal in downtown Srinagar, who suffered many injuries and was proclaimed dead at the SMHS hospital, and Rafiya, of Naid Kadal.

The police are seeking to identify and apprehend the terror suspect, and they plan to destroy the grenade-throwing mechanism as soon as possible. Police have uncovered some crucial information, and the investigation is proceeding apace.

Many political outfits condemned the attack on the innocents :

“My sincere sympathies to the family of the innocent citizen slain & hope for rapid recovery to the injured,” Lieutenant-Governor Manoj Sinha said after the incident. We are adamant about dismantling the terror ecosystem and defeating the terrorist threat that is still being perpetuated by a neighbouring country.”

Condemn this heinous assault. People in J&K have paid a high price, and unfortunately, neither India nor Pakistan are doing much to end the conflict and stop the killings. Former Jammu and Kashmir Chief Minister Mehbooba Mufti tweeted, “My condolences are with the bereaved families and loved ones.”

In the greatest possible terms, I condemn this heinous crime. Former Jammu and Kashmir Chief Minister Omar Abdullah tweeted, “May the deceased find a place in Jannat and may the injured achieve a thorough and rapid recovery.”