Home » MS Dhoni | Journey from a Ticket Collector to a Cricketing Icon.

MS Dhoni | Journey from a Ticket Collector to a Cricketing Icon. 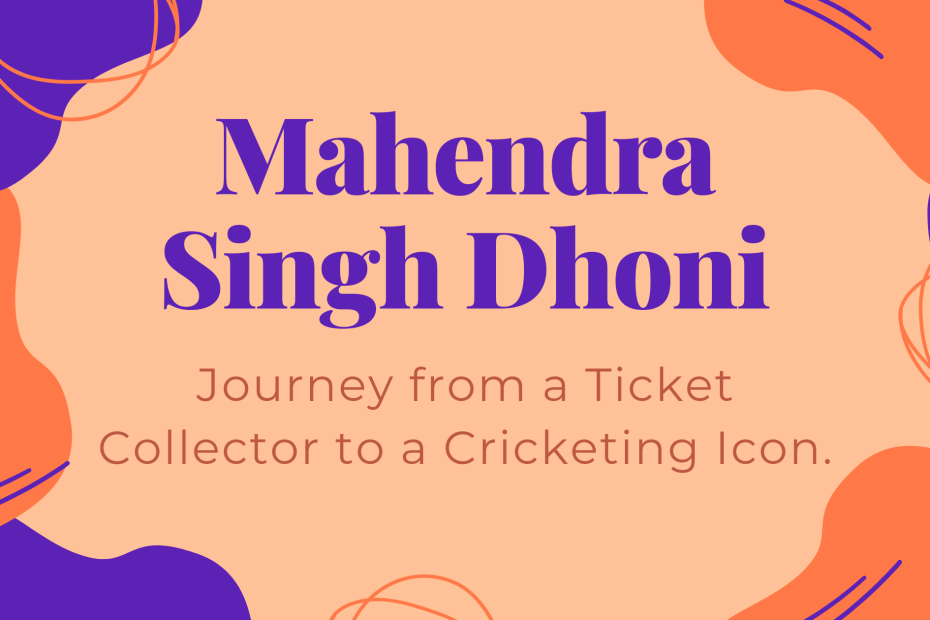 Hey Guys, Welcome to FactsMinister. Today we will show you the life story of the former Indian Captain MS Dhoni.

Mahendra Singh Dhoni was born in Ranchi, Jharkhand. His father Pan Singh, worked in a  management position in MECON. He  passed his schooling from DAV Jawahar Vidya Mandir. Since childhood, Dhoni was quite interested in Sports. He initially excelled in playing badminton and football .Due to his talent he  was also selected at club and district level competition. MS Dhoni was initially selected for the school’s football team,  due to his excellent goalkeeping technique but his main interest was in cricket. Later Dhoni, after passing his 10th grade mainly focused on Cricket.

He joined the Commando cricket club in 1995 and played for them for three years behind the stumps. In the 1997/98 season, he was selected for the Vinoo Mankad Trophy Under-16 Championship and performed admirably. MS Dhoni began playing for the Central CoalFields Limited (CCL) team in 1998. Deval Sahay would give him fifty rupees for every six he scored in Sheesh Mahal tournament cricket games during his tenure at the CCL. Sahay then lobbied for Dhoni to be named to the Bihar team. Deval Sahay chose Dhoni to play for the Central CoalFields Limited (CCL) team in 1998. Dhoni was making his professional cricket debut for the first time. Dhoni’s extraordinary talent drew the attention of Deval Sahay, who used his connections in the Bihar Cricket Association to lobby for Dhoni’s inclusion in the Bihar side. For the 1999–2000 season, Dhoni made his senior Bihar Ranji Team debut. He was also a member of the Bihar U-19 team for the 1998–99 season, scoring 176 runs in seven innings across five matches.

MS Dhoni was chosen  to represent East Zone over international cricketer Deep Dasgupta after playing Ranji Trophy for almost three years. Dhoni was thrust into the spotlight at that point. TRDW, BCCI’s small-town talent-spotting project, scouted Dhoni, who was identified by TRDO Prakash Poddar. Dhoni has been called up to the India A team for a tour of Zimbabwe and Kenya. His performances on that tour drew the notice of Sourav Ganguly and Ravi Shastri, among others. Dhoni arrived on the international stage at a time when India’s ODI team was looking for a Wicketkeeper-Batsman. In the 2000s, we saw Rahul Dravid and later the emergence of wicketkeeper/batsman like Parthiv Patel and Dinesh Karthik from the junior ranks. They didn’t, however, blend in well with the rest of the team. Then came Dhoni, who was named to the ODI squad for the 2004/05 Bangladesh trip.

On September 24, 2007, Team India ushered in a new chapter in cricket history., India won the inaugural edition of the ICC T20 World Cup, headed by an inexperienced but confident skipper MS Dhoni.

Dhoni was the captain of all three Tests, T20Is, and ODIs by the 2011 World Cup. Dhoni’s major contribution with the bat came against Sri Lanka in the finals. After Sachin Tendulkar, Virender Sehwag, and Virat Kohli all lost early wickets while chasing 275 at the Wankhede, Dhoni was moved to the top of the order.Due to his outstanding batting performance India lifted the world cup after 28 years.

The Men in Blue were able to reach the semi-finals of the 2015 World Cup in Australia and New Zealand under Dhoni’s captaincy, after defeating Bangladesh in the quarter-finals. However, they were defeated in the semi-finals by hosts Australia at the Sydney Cricket Ground.

At the age of 38, Dhoni played his final World Cup match. He was India’s wicket keeper going into the tournament this time. MSD was mostly critiqued for his strike rate and ‘lack of intent’ despite his useful knocks against South Africa, Australia, and the West Indies.

Dhoni may be retired from playing international cricket but his legacy and contribution to our Indian cricket team is immortal.