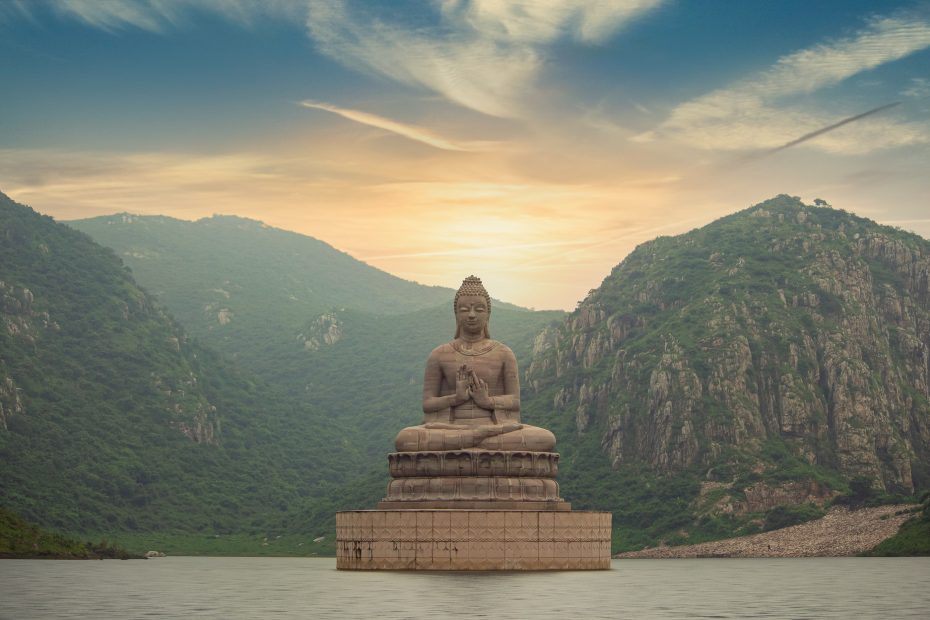 Sarnath is a town in Uttar Pradesh, India, about 10 kilometres north of Varanasi, near the confluence of the Ganges and the Varuna rivers. The deer park in Sarnath is where Gautama Buddha first taught the Dhamma and where the Buddhist Sangha  formed following Kondanna’s enlightenment.

Sarnath is one of the world’s four main Buddhist pilgrimage sites. It is significant because it is where the Gautama Buddha delivered his first preaching. However, it is not necessary that you have to be a Buddhist to enjoy your visit. Sarnath is also a tranquil and refreshing day trip from Varanasi.  Sarnath has both Jain and Hindu connections as well.

A young prince named Siddhartha Guatama was born in Lumbini around the 5th century B.C. He led a protected and lavish lifestyle. However, shortly before his 30th birthday, he decided to venture into the countryside, where he experienced illness and death. This compelled him to give up all of it and travel in search of relief from suffering. He eventually realised that discipline of the mind leads to liberation. He then sat down to meditate under a sacred fig tree, vowing not to rise until he attained enlightenment. It did happen on a full moon night, and it was profound. The tree (Bodhi tree) stood on the grounds of the marvellous Mahabodhi temple in Bodhgaya.

Gautama Buddha did not begin preaching in Bodhgaya. He had five students he wanted to teach first. He’d previously used physical discipline as a means of liberation with them. They’d abandoned him in disgust after he realised it wasn’t the proper path to freedom. When  Gautama Buddha learned that they were living in a deer park in Sarnath, he went there. They had already become his first disciples after being impressed by his newly found enlightenment and the Four Noble Truths.

Sarnath and the Influence of Buddhism

Buddhism prospered in Sarnath because of its closeness to Varanasi. The majority of the constructions, however, were built by Mauryan Emperor Ashoka a few centuries after the religion’s existence. Guilt over his vicious incursion of Kalinga drove him to transform to Buddhism and the practise of pacifism, and he passionately went about designing and building stupas and pillars to enhance the religion all over India.

Successive leaders added to Ashoka’s stupas and monasteries at Sarnath. Sarnath was an active centre of art and Buddhism sculpture during the reign of the Gupta dynasty in the 4th century A.D. By the 7th century, Sarnath had grown into a major centre for Buddhist studies, with 1000s of monks living in Buddhist temples.

The most famous of the Ashoka pillars is the one at Sarnath, the site of Buddha’s First Sermon, during which he shared the Four Noble Truths (the dharma or the law). The Ashoka pillar is still in place where it was originally buried, but the capital is now on display at the Sarnath Museum. This Ashoka pillar was adopted as India’s national emblem. It appears on the one rupee note as well as the two rupee coin. It inspired India’s national emblem, which features four lions and a dharma chakra (wheel representing Buddhist teachings). The chakra is also depicted on the Indian flag.

Adorned by four lions, each confronts one of the four cardinal directions. Their mouths are open, either thundering or extending the dharma, the Four Noble Truths, throughout the land. The lion symbolises the Buddha, erstwhile Shakyamuni, a Shakya (lion) clan member. The lion in Ashoka Pillar is also a sign of prestige and governance, and it may portray the Buddhist king Ashoka, who commissioned the columns. Originally, a cakra (wheel) was positioned above the lions.

The Ashoka pillar writing is from bottom to top. The lotus symbolises the shallow water of the materialistic world, and the four creatures remind of the never-ending cycle of rebirth as we remain stuck in the material universe due to our ignorance and prejudice. However, the chakras in between them show promise of the Eightfold Path, which leads to the immovable centre at the wheel’s hub. It is worth noting that the number of spokes in the wheel (eight for the Eightfold Path)  is not yet  standardised in these extracts.

In the 12th century, Turkish Muslim invaders showed up and destructed much of Sarnath, as well as many other Buddhist sites in North India. The majority of what managed to remain of Ashoka’s Dharmarajika Stupa was annihilated in the late 18th century by Jagat Singh (Dewan of Raja Chet Singh of Banaras) and used as buildings. This reawakening of Sarnath, however, compelled British archaeologists to unearth the site in the nineteenth and twentieth centuries.

Top places to visit in Sarnath

Sarnath is ideal for a quick weekend getaway or a longer trip that includes both Sarnath and Varanasi. With a plethora of temples, gardens, and parks that are simply fantastic places to hang out, Sarnath ranks among the best places to visit for a serene holiday. Keep an eye out for must-see places to visit in Sarnath

The primary stupa of Sarnath, Dhamek Stupa, is highly regarded for being the exact location or Rishipattana where Lord Buddha brought to light his first eightfold path preaching to disciples. It is one of the best places to visit in Sarnath .In the third century BC, King Ashoka gave the order to redevelop the existing pe-Buddhism tumuli,  accomplished 2,500 years ago. The cylinder – shaped stupa, which has a diameter of 28 metres, is completely made of bricks.

The Mahabodhi Society Temple in Sarnath is one of India’s oldest temples, built entirely of bricks during the Gupta period. Lord Buddha acquired enlightenment. When a Buddhist monk from Sri Lanka, Dharmapala, saw the temple’s crumbling state, he started a campaign to raise global funds from Buddhist countries in order to restore it.  a temple is adjacent to the archaeological site that was an exact replica memorial on the site making it one of the best places to visit in Sarnath.

The Chaukhandi Stupa  constructed in the 5th century to commemorate the location where Lord Gautama Buddha first met his disciples. Today, the site is of enormous historical, religious, and architectural significance. The structure, which stands on a terraced rectangular podium,  topped by a newer octagonal Mughal tower.  Constructed in 1589 AD by Akbar to immortalise his father Humayun’s visit to the site. A walk all around Chaukhandi Stupa and completion of the Kora is a great blessing and also one of the most amazing places to visit in Sarnath.

Some of the most comprehensive wrecks among sacred Buddhist sites is in Sarnath. Several stupas unearthed from the ruins of age-old buddhist temples, museums, gardens, and other intriguing sites are popular tourist destinations in Sarnath. In Sarnath, Uttar Pradesh, Deer Park, or Istipana, is both a spiritual site and a mini-zoo. It is one of the places to visit in Sarnath.  The most important of these is the Deer Park or Isipatana, which is where Lord Buddha advocated his first preaching to his five disciples.

5.The Garden of Spiritual Wisdom

The Garden of Spiritual Wisdom in Sarnath, Varanasi It is one of the exciting places to visit in Sarnath. The garden, which is  behind the Chaukhandi Stupa, uses a combination of showcases and carvings to impart the basics of Buddhism and Indian spiritual practices. Tourists enjoy the divine perspective of this interesting and educational, sacred site, which is beautifully constructed. An Ayurvedic herbal garden raises awareness of the benefits of Ayurveda.

The Buddha Fountain is unquestionably one of the msot wonderful places to visit in Sarnath that you should not miss at any cost. A Wat Thai temple in the centre, surrounded by lush gardens and vegetation, as well as some lovely fountains and waterworks. This is a fantastic option for spending some free time during your visit in Sarnath and taking a shoddy evening walk to enjoy. The place’s holiness is simply something to recall for a lifetime.

Mulagandha Kuti Vihar is one of the country’s most famous temples dedicated to  Gautama Buddha. This temple is well-known for its mural paintings, which depict the life of Lord Buddha and profess Buddhist teachings and morals. Following Buddhism, this temple also keeps close relation to Japanese cultures. There is also a beautiful garden with a Bodhi tree at the temple. In Sarnath, you can also find a large bronze bell and a marvellous statue of Lord Buddha teaching his adherents about the Dharma for the very first time.

The Thai Temple, a well-known appeal in Sarnath,  built in the marvellous architectural style. It is one of the places to visit in Sarnath. The temple is set among lush gardens and Thai Buddhist Monks take care of the temple, providing a calm and peaceful environment.

The Japanese temple’s official name is Nichigai Suzan Horinji Temple, but it is usually referred to as “Japanese Temple” by local guides and tourists. It is one of the best places to visit in Sarnath. The temple’s delightful architecture is evocative of world-famous Japanese temples. The Japanese Temple is near Sarnath’s main market. This Japanese temple has typical Japanese aesthetics, with a double-story pagoda and a sloping roof curving up at the eaves, giving it a very calm feeling.

It is also a popular place to visit in Sarnath for Jain devotees. Shreyansnath, the 11th Jain Tirthankara, born in a village near Sarnath. The route to this Jain temple is surrounded on both sides by gardens and vegetation.The Digambar Jain Temple, also known as the Shreyanshnath Jain Temple,  built in 1824. The temple contains a large image of Shreyansnath, as well as appealing murals depicting the story of Bhagwan Mahavir, the Jain religion’s founder.

How to Reach Sarnath