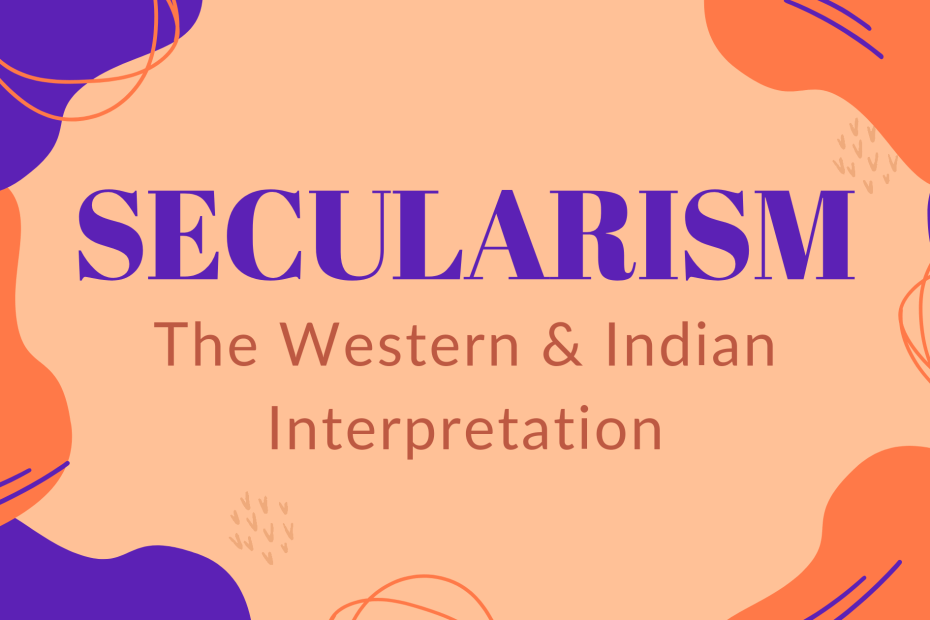 Hey guys, Welcome to FactsMinister. Today, we will show you the interpretation of Secularism from Indian and western nations’ perspectives.

The  word “secularism” in a modern sense, was the British writer named George Holyoake, in 1851.,he used a term that would advocate conducting life based on a naturalistic perspective, but without outrightly denying the existence of religion but ensuring coordination with believers. Different individuals build and utilize it in various ways, meaning of connoting various thoughts, cycles, directions, and events. Its use and implications are genuinely distinct.

There are three types of manifestation of Secularism: political, philosophical, and socio-cultural. The first type of Secularism is interpreted as political Secularism were the belief systems and strategies which try to keep community life liberated from strict religious and spiritual domination or inclination. That is, keeping government out of religion and religion out of the matter of government. The second type of Secularism, i.e., Philosophical Secularism, involves the outright deconstruction of religious truth claims, reactions of spiritual practices and pioneers, and the declaring against theist polemics and hostile to religious, social dissent; in other words, Philosophical  Secularism intends to capture that group of thought, composing, and activism which tries to investigate religion, expose its cases, challenge its administrative specialists, and at last clarify religious individuals of their strict confidence and interest.

Finally, Socio-cultural Secularism implies people detach themselves from religious activities on a day to day basis. It ensures a society that is entirely secular and rational while being indifferent to actions of various concepts and superstition beliefs of a religion. With the understanding of Secularism and its different types, let’s now look into the interpretation of the term in Indian and Western Societies.

The Indian interpretation of Secularism is based on the principle of  “Sarva Dharma Sama Bhava,” which means all religions are equal and the same. The Sanatan Dharma, which in Hinduism, is to create as an all-encompassing religion by inviting distinctive otherworldly customs and coordinating them into a typical standard. The word ” Secularism” was incorporated in the preamble of the Indian constitution through the 42nd amendment,1976, where the State will be neutral. All religions can practice their faith equally with no specific favor to one religion over another. The State shall strive to protect the religious practices with no direct interference over their activities. Still, there will be equal protection for every religion as a right to display their form of god in public and pray in a united way. The State can fund the religious activities for their promotion as per Article 26, as all religions have the right to maintain and protect their religious institution. Still, the government has no right to impose or collect religious tax on people. In addition to it, Articles 29 and 30 guarantees protection of the rights of minorities so that those individuals won’t subvert them in terms of majoritarianism.

In India, we can see various government-appointed departments like Departments of Religious Endowments, Wakf Boards, etc., ensuring the funding and promotion of respective religious activities. So the Indian way of Secularism is a classic example of a balanced approach of a state towards religion where they try to create harmony and equitable society with the promotion of all.

The Western way of Secularism

While The western way of Secularism is quite the opposite where the State has no role in the religious matter of people. here will be non-religious sponsored schemes which imply a complete barrier over the religion and State with zero interference. It is basically a negative mode of engagement where the State neither can fund the religious activities of people nor collect taxes from people for the same which leaves the people with protection and promotion of their religion. However, the State can interfere if some internal activities of religion or certain practices cross the established limit of the law regardless of whether the State has zero roles in its internal matters.

Therefore, we can say that even though the term secularism is one, its actual interpretation tends to differ from region to region based on their understanding and established laws. In recent years with growing hatred and religious domination, it’s imperative to have a perfect secular society so that neither the majority nor the minority would feel discriminated against by the respective states, ensuring peace and prosperity in the democratic functioning of a society.