Home » Some Amazing Facts about the Seven Wonders of the World.

Some Amazing Facts about the Seven Wonders of the World. 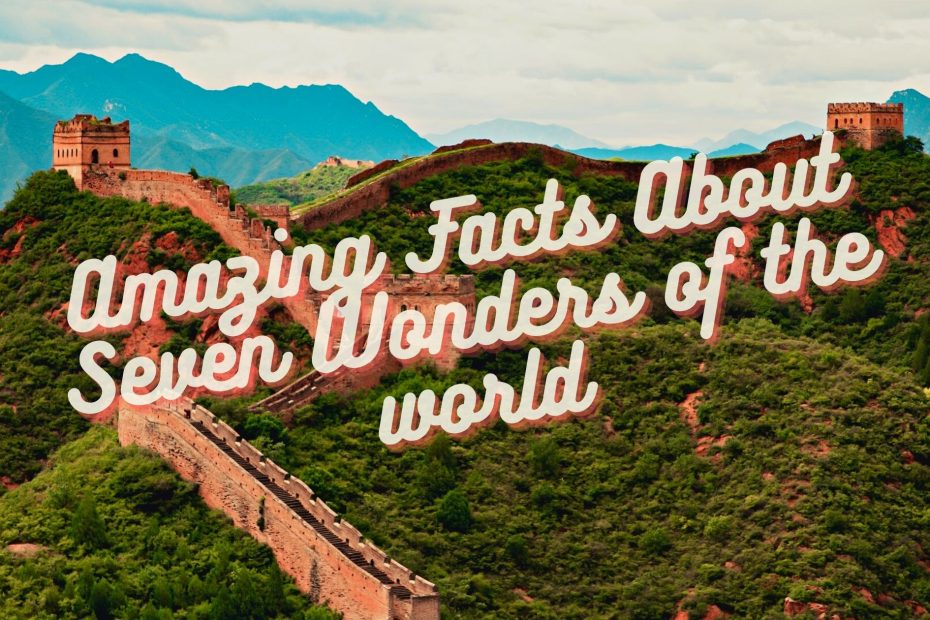 Hey Guys Welcome to FactsMinister. Today we will show you some of the amazing facts about the seven wonders of the World.

The Taj Mahal was erected on the banks of the Yamuna River by Mughal Emperor Shah Jahan in remembrance of his most adored wife, Mumtaz Mahal. Many enthusiasts from all over the world are enthralled by this ivory-white building. The Taj Mahal is a symbol of love, and its splendour is enhanced by the sunrise and full moon evenings. The skillfulness of around 20000 artists has earned this wonder a place among the world’s seven wonders. One of the amazing facts about Taj Mahal is that no one can imitate the Taj Mahal’s structure. And there is a modern myth that is used as a reason for this fact that claims Shah Jaha ordered the hands of the workers to be chopped off. However there are no historical records to prove this claim.

The Great Wall of China is the original wall, which was built during the reign of Emperor Qin Shi Huang of the Qin Dynasty, and took about 20 years to build. The wonderful view of China, the plateau, and the beauty of China can all be seen from this 21,196 km long wall. This wall was constructed to safeguard the Chinese Empire from nomadic raids and invasions. One of the amazing facts about this wonder of the world is that the great wall of China is also known as the world’s longest graveyard. More than a million individuals died in the construction of this wall, and archaeologists have found out buried human remains within it.

Heter da Silva Costa built Christ the Redeemer, a 125-foot-tall statue. He built this amazing statue with the help of sculptors and engineers from France and Romania. The statue of the Christian God in Brazil stands at a height of 98 feet excluding its 38 Feet Pedestal. Because the idol is on top of a mountain, it is at risk of being struck by lightning, which also happens to collide with it three to four times a year. A thumb of the statue was damaged by lightning just before the 2014 FIFA World Cup. One of the amazing facts about the seven wonders of the world is that the structure of Christ the Redeemer was not originally constructed in Brazil, but rather in France.

The Colosseum in Rome, built between AD 70 and AD 82 by Emperor Titus Vespasian, is the world’s most famous ancient amphitheatre. It took 9 years to complete this structure. One of the amazing facts about The Colosseum, Rome is that this amphitheatre has witnessed executions and conflicts that resulted in the deaths of over 400,000 people. Many events, exhibitions, and competitions have taken place in this edifice.

The lost city of the Inca, called Machu Picchu, dates back to the 15th century and is nestled among stunning hills and shimmering meadows. This edifice is composed of dry stone walls and is one of the world’s seven wonders. The Inti Vatana, the Temple of the Sun, and the Room of Three Windows are all important constructions at Machu Picchu. One of the amazing facts about Machu Picchu is that Many of the stones used in the construction of the city were over 50 pounds, although no wheels are claimed to have been used to transport them up the mountain.

Chichen Itza, one of the world’s seven wonders, is associated with Maya civilization. Here are the Maya civilization’s relics that have survived on the Yucatan Peninsula. This site has several pyramids, temple playgrounds, and columns. Many visitors claim that the Chichen Itza sites are noted for their strange sounds. One of the amazing facts about Chichen Itza is that If you clap once from one end of the ball court, it will reverberate in nine different locations across the court.

Petra was the capital of King Aretas IV’s Nabataean empire, and it most certainly flourished from 9 B.C. to A.D. 40. One of the amazing facts about Petra is that this civilization’s members proved to be early masters of water technology. Building elaborate tunnels and water chambers that assisted in the creation of a pseudo-oasis. Petra was also named “Rose Red City” from the pink coloured sandstone used to construct this man-made marvel. Petra is one of Jordan’s most important tourist destinations. Many tombs and temples may be found in this beautiful wonder, which are venerated by visitors.