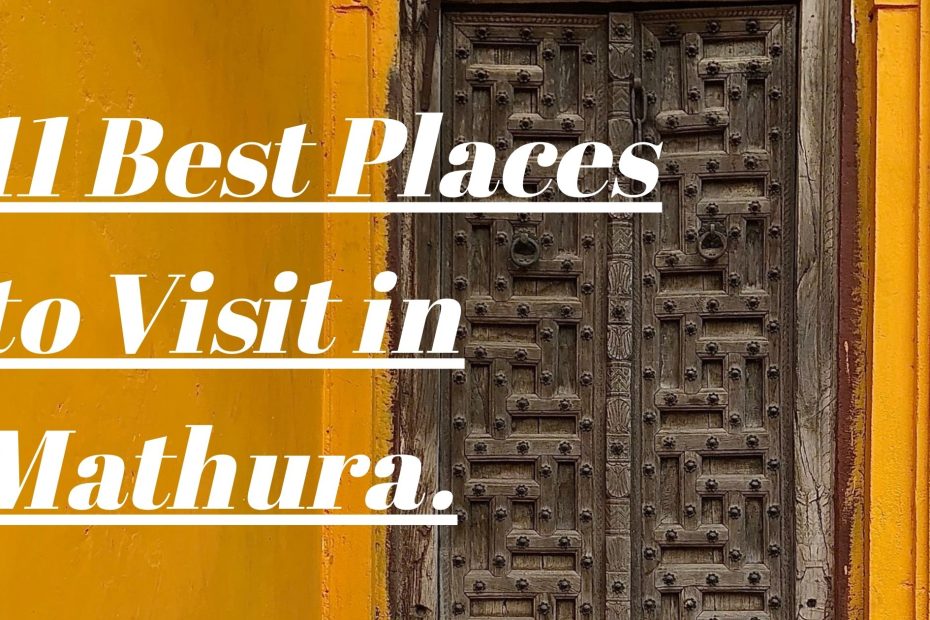 Hey Guys , Welcome to FactsMinister. Today we will show you top 11 best places to visit in Mathura

Mathura is considered one of the holiest lands in India and is full of people seeking spiritual enlightenment at any time of the year. Located at a distance of about 150 km from Delhi, Mathura is known as the birthplace of Lord Krishna. It has many historical and religious sites. One of the most famous tourist places to visit in Mathura is Shri Krishna Janmabhoomi. Because this place  claimed to be the same place where Lord Krishna was born, and the prison where he was born is now for visitors to see. Apart from the jail, there is also a grand temple in Shri Krishna Janmabhoomi.

Every nook and corner of the narrow streets and alleys of this place still retains an old world beauty that defies the urbanism of the city. Mathura has a great history which you can witness only by looking at the old-fashioned architecture, rotting ruins of old houses and the splendid amiability of the local people who are always ready to show you their surroundings.

Mathura is also known as Brajbhoomi. The history of Mathura is about 2500 years old. Here for the first time Ram temple was built by Yaduvanshi king in 80 years BC. After some time this temple was demolished in the Kushan attacks, later the emperor Chandragupta Vikramaditya of the Gupta period got the second temple built in 400 BC.

During the reign of Mughal emperor Jahangir, a new huge temple was built at the birthplace of Lord Shri Krishna. It is said that Jehangir not only gave permission to rebuild the temple, but also paid Bir Singh Bundela thirty-three lakhs to do it. The cost of construction of this temple was about 33 lakhs. However, the temple was demolished in the Aurangzeb era.

Now, let’s look at the list of Best Places to Visit in Mathura.

Govardhan Hill, or Giri Raj, is 22 km from Vrindavan. It is mentioned in the holy Bhagavad Gita that Mount Govardhan is no different from Lord Krishna. All his worshipers thus worship the simple stones of the hill as they worship his idol. This hill is made of sandstone with a length of 38 km and a height of 80 feet. It is one of the amazing places to visit in Mathura.

There are many important places to visit like Mansi Ganga, Mukharvind and Danghati. History tells us that Lord Krishna raised the Govardhan hill on one finger in his youth to protect his Mathura village from heavy rains and thunderstorms. Hence, this hill is considered sacred and visited in devotion by devotees on Guru Purnima, Govardhan Puja by walking around a 23 km barefoot mountain, called Govardhan Parikrama. Lord Krishna asked everyone to worship the hill after Lord Krishna saved his village. And hence Govardhan Puja takes place a day after Diwali. It is a serene place, and definitely a must have experience!

Shri Krishna Janmasthan Temple is located in the holiest city of Mathura, Uttar Pradesh. It is constructed around the prison cell where his evil uncle Kansa imprisoned the family of Lord Krishna, Mata Devaki and Vasudeva. For Hindus, the temple is of great importance as it is believed to be the birthplace of Lord Krishna. Apart from the jail cell, there are other temples in the Mathura region, which are dedicated to Lord Krishna, the sacred aura and its simplicity fills the heart with certainty, this is actually the place where Lord Krishna manifested himself while entering the temple. It is one of the best places to visit in Mathura

Destroyed several times by several kings, it was finally rebuilt through the help of industrialists to finance it. During festivals like Janmashtami, Basant Panchami, Holi and Deepawali, which are celebrated with great enthusiasm, the visit to Krishna Janmasthan Temple becomes more attractive.

Radha Vallabh Temple, one of the seven temples in Thakur of Vrindavan, located near Gautam Nagar on the rock of Banke Bihari Temple. The temple is a symbol of the sacred and spiritual devotion of Radha and Krishna, shown in the unique ‘rasa-bhakti’ form. Due to its splendid architecture and beautiful decoration, Radha Vallabh Temple stands as one of the best places to visit in  Mathura. Also, it is one of the places to visit in Mathura for couples to take blessings from God.

A beautiful reservoir made of sandstone and a true relic of the bygone era, Kusum Sarovar has a flight of stairs that descend into the pond. According to folklore, the reservoir was named after Kusum, one of Radha’s maids. It is a great place to take a bath in summer. One can also find many temples in and around it during a visit to Mathura and Vrindavan areas.

The emerald green water is cool and the pond has a flower border, which contains various flowers. It is believed that Radha collected these flowers to make garlands and flower ornaments for herself. Perfect for a quiet evening, you can watch the sunset here.It is one of the exciting places to visit in Mathura.

To know more about Kusum Sarovar refer to the link below :

About 50 km from Mathura, Nandgaon is a quaint town situated in the Nandishwar Hills. It is the home of Krishnaji’s adoptive parents – Nandji and Yashoda Maiyya. Many temples are situated on the top of this hill. Other popular temples here are Nritya Gopal, Nand Nandan, Uddhav Kyaro and Gopinath. There is a beautiful lake called Pan Sarovar which is very much liked by the tourists. There is also a temple dedicated to Shani Dev around this area.It is one of the spiritual places to visit in Mathura.

One of the places to visit in Mathura, Radha Kund is located near Govardhan hill in Mathura. It is mostly popular for its pure and holy water, which is believed to have magical healing powers, making it an important sacred site in the city. Radha Kund dates back to the days of Krishna and Radha and symbolizes their immortal love.Due to this it is one of the amazing places to visit in Mathura for all devotees.

It is said that a single dip in Radha Kund can absolve your sins and purify your soul. And that is one of the many reasons why it is an important pilgrimage site for locals and devotees from far and wide.

To know more about Radha Kund refer to the link below :

Situated on the banks of river Yamuna, the majestic Kansa Fort is an ancient fort and one of the most famous tourist places in Mathura. As the name suggests, it is dedicated to Kansa – the maternal uncle of Lord Krishna. Situated close to the Krishna Ganga Ghat and Gau Ghat, this massive fort serves as a popular tourist destination, attracting a large number of travelers every month with its Hindu-Muslim fusion architecture.

Visiting this water park is one of the most fun things to do in Mathura. Built on 14 acres of land and filled with great thrilling slides and roller coasters, Dolphin Water World was inaugurated in 2002 and has been one of the most preferred tourist places to visit in Mathura/Agra. It features a playground, locker rooms for children and is a great entertainment center for tourists and city natives. Not only kids but adults can also have fun here as the ride is suitable for all kinds of tourists.

To know more about Dolphin water park refer to the link below :

It is situated about 6.5 km from Mathura Junction on the Mathura-Vrindavan Road. The peaceful Birla Mandir, also known as Geeta Mandir, is one of the most famous places to visit in Mathura. It is a major Hindu pilgrimage site, frequented by devotees and pilgrims throughout the year. Dedicated to Lord Lakshmi Narayan, This holy temple has a remarkable architecture which speaks of its grandeur and proudly displays its exquisite carvings and paintings.

Earlier known as Curzon Museum of Archaeology, the Government Museum in Mathura is located in Dampier Park. Locals like to call it the Mathura Museum, and never get tired of admitting that it is one of the finest museums in the country with a vast collection of ancient relics, sculptures, coins and paintings. Apart from the historical relics and artifacts, this museum makes it one of the best places to visit in Mathura.

In this museum, many important historical things related to the Kushan and Gupta dynasty have been kept here. Apart from this you can see things related to Lord Krishna here. , whenever you get the privilege of going to Mathura, then definitely go there once. The distance of this museum from Mathura Junction Railway Station is about 2.5 kilometers.

This temple is located on Raman Reti in Vrindavan Dham of Mathura district in India. It is one of the ancient and famous temples of India. Banke Bihari is a form of Lord Shri Krishna. The distance of Vrindavan Dham from Mathura Junction is about 13 kilometers. The black colored idol of Krishna is known as Banke Bihari ji. It is said that you cannot take your eyes off of an idol. It is definitely a wonderful feeling. The idol of Banke Bihari was not made, but appeared on the request of Swami Haridas ji so that others can also have such a direct darshan of Lord Shankar and seek his blessings.It is one of the spiritual places to visit in Mathura.

To know more about Banke Bihari Temple refer to the link below:

Check out more of our Travel & Leisure Articles.