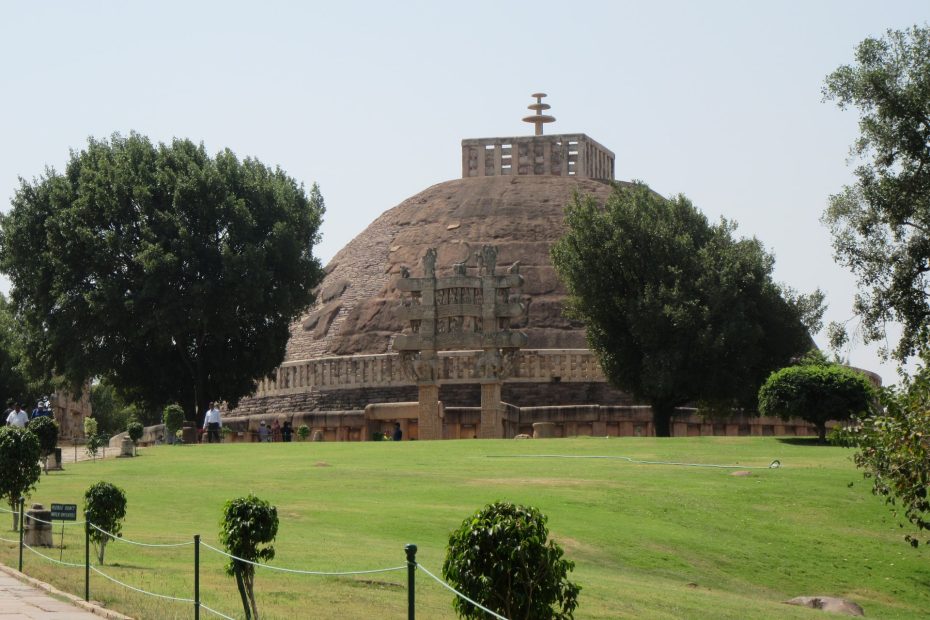 Many people have visited and conquered Madhya Pradesh. Emperors who came to Madhya Pradesh have left their imprints on the area, from the Guptas to the Rajputs to the Mughals. People continue to uphold their land’s past, and the gorgeous structures serve as testimony of the elegant architecture . All of these landmarks, from stupas to temples to monuments, are now considered heritage / historical places in Madhya Pradesh.

Khajuraho is a small historical town in Madhya Pradesh that is located in the Bundelkhand region. Khajuraho is famous all over the world for its beautiful temples with amazing  carvings. It is a great example of Indian architecture and culture from the mediaeval period. The carvings on the walls represent desire in the most sensual yet elegant ways, while the architecture of these Hindu and Jain temples depicts the innocent form of love.It is one of the best historical places in Madhya Pradesh.

This towering monument, located on the top of a large rocky mountain near Gwalior in Madhya Pradesh. This historical site in Madhya Pradesh dominates the entire city of Gwalior. Evidence says it has been around since the 6th century, and it is an integral element of the city’s identity and architecture. It is also the site of the world’s second-oldest reference to the number ‘zero,’ which was discovered in the form of a carving within a temple on the fort’s highest point.

The Bhimbetka rock shelters are an archaeological site and historical sites in Madhya Pradesh that show the oldest signs of human activity on the Indian subcontinent, marking the start of the South Asian Stone Age. In 2003, it was designated as a UNESCO World Heritage Site.

To know more about Bhimbetka Rock Shelters refer to the link below :

Orccha’s Rani Mahal is an amazing fortification straight from the pages of history. The fort is lavishly decorated with complex carvings and vibrant paintings that make a strong statement about Uttar Pradesh’s art and artisans. This destination, which translates to ‘the queen’s palace,’ was previously the royal apartments for Raja Madhukar Singh’s wife, and its most recent tenant was Rani Laxmi Bai herself. The palace was recently turned into a museum.It is one of the fascinating historical places in Madhya Pradesh.

Since 1989, Sanchi Stupa has been a UNESCO World Heritage Site. It is the perfect destination for Buddha’s and his followers’ relics. It was built in the 3rd century BCE by the Mauryan emperor Ashoka and is a great example of Buddhist art and construction. Sanchi is distinct in that the Buddha is represented by symbols rather than figures.