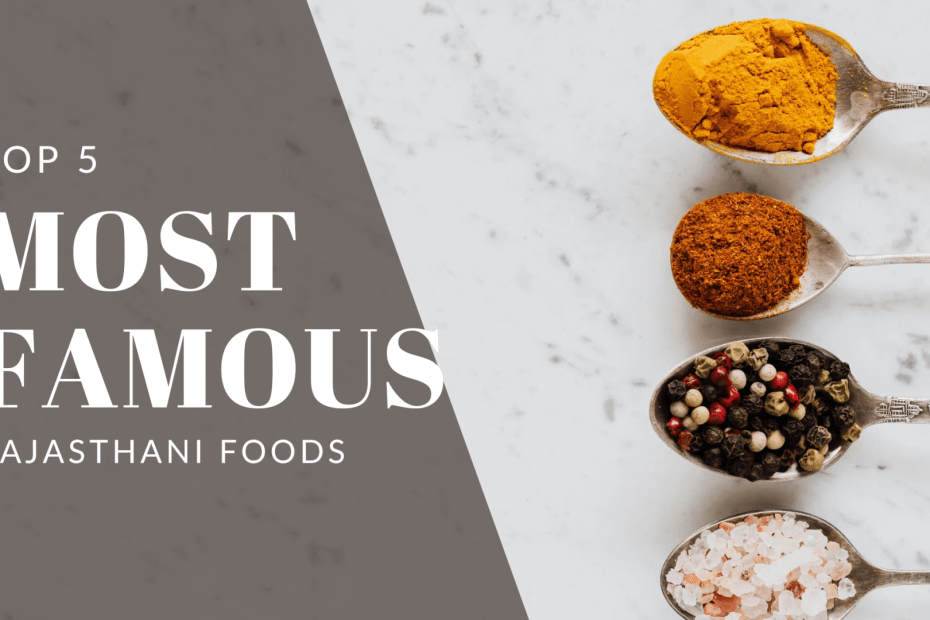 Hey guys, Welcome to FactsMinister. Today, we will show you the top five Most Famous Rajasthani foods.

When you think of Rajasthan, its colors, landscapes, and people often come to mind. And when you think of Rajasthani cuisine, some of the most famous foods like Dal Bati Churma, Chokha, Malpua, Mirchi Ka Salan, and Kachori immediately come to mind. This article will go over five Most Famous Rajasthani foods, not only because they’re delicious but also because they represent the state’s cultural identity. You can find them in any restaurant or food cart in the city!

Arguably one of the amazing rajasthani foods, Ghevar is a sweet made from ground wheat flour and jaggery (unrefined sugar). It’s sweet, delicious, and perfect for cooling off during those hot Rajasthan summers. Also referred to as Shahi Tukra in certain parts of north India, it’s usually served with a glass of buttermilk or lassi on extraordinary occasions like Diwali or birthdays. Most cities have their variation of Ghevar, and they are mostly named after their city. Some delicious examples include: Jaipur ghevar – Known as the king of sweets, Jaipur ghevar is a must-try dish that you can find throughout Rajasthan.

To know the recipe of Ghevar refer to the link below :

The traditional amazing Rajasthani food, Mirchi ka salan is not just one of India’s most famous dishes – it’s also responsible for defining culinary sophistication in what used to be a largely rural state. Salan means curry, by the way. The dish is made with green chilies (mirch), fried with onions, and then simmered in a gravy of tamarind, tomato puree, coriander powder, and turmeric powder. It’s sweet but spicy, full of flavor but not overpowering; gorgeous whether you use chicken or vegetables or paneer for cooking it.

We all have our favorite foods from home, but what about those from other places? In India, each state has its culinary traditions. Many of these dishes are rooted in centuries-old recipes passed down through generations. One such example is Dal Baati Churma, a famous specialty dish across many parts of Rajasthan (the state known for its unique culture and landscape). In Jodhpur and Jaisalmer, Dal Baati Churma combines two staples: dal (lentils) and roti (flatbread).

To know the recipe of Dal baati Churma refer to the link below :

This delicious  and amazing rajasthani food Kachori  is usually served on special occasions, with a sweet yogurt chutney. It consists of a fried pastry stuffed with spicy potatoes, flavored with ginger, garlic, and coriander. These kachoris are deep-fried in clarified butter until they turn golden brown. If you want to try some traditional Rajasthani food, then you can’t miss out on these delicious potato dumplings. There’s no doubt that they taste even better than they look! According to reports, people start flocking to Udaipur for scrumptious kachoris every winter.

There are very few foods in India as rich and delicious as kadhi. Made from gram flour and spices, including coriander seeds, cumin seeds, fenugreek seeds, and black peppercorns, kadhi is one of those dishes that makes you feel like you’re eating something unhealthy. But it’s just pure deliciousness! Kadhi can be eaten with puris (fried puffed bread) or with pooris (deep-fried dough). Though there are many variations to make kadhi in different parts of India, one thing remains constant: taste! If you visit any part of Rajasthan state in Northern India with a sizable Rajasthani population, expect some fantastic vegetarian food.